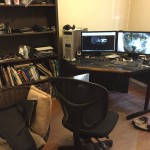 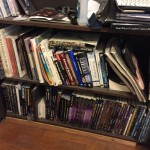 Day 12, “Environment,” so this is my space. It’s pretty humble. These days pretty much all of my work is on the computer. Been years since I’ve been at an easel or had a set of box woods in my hand. Should really fix that, now that I have the time during the day. My “mess” is quite limited in comparison to Mr. Bacon (Francis Bacon’s studio was the subject of the environment lecture). I’ve never been that chaotic in my inner thinking our outer space. On the desk, my tablet, ever present. I don’t mouse for anything but games and only then because they don’t support the tablet. The shelves to the left are books and equipment in support of tech. I build my own machines, the computer on the left is my most recent baby. I’ve been doing that for more than twenty years at this point. It’s always just been most cost effective to build from parts then to get something from one of the vendors. I view it as “grinding my own pigments”, let’s say.

The books are really two sections, one for fun and one for work. The fun shelf houses all my various role-play game books. I collect obscure titles with interesting ideas. Not your standard D&D stuff, though I have a group of those for the kids (when they were growing up). I suppose you could call that all fuel for my imagination. When I create, those worlds are often where I’m translating material from. The second shelf shows how eclectic my studies can be. From left to right there’s books on Michelangelo and Leonardo’s work, various anatomy texts, sketching and draftsman manuals, animation principles and practice, software specific texts, directing and visual storytelling textbooks, film and script writing material, more programming texts, sketchbooks, an old Olivia collection of cheesecake (I’ve always been fond of cheesecake), and the ever present tome of the nine old men, Disney’s The Illusion of Life.

Day 13, Breathe or what I’ve called taking a breath, basically being a moment to let go, relax and reflect. Not something I have a problem with most days. My upbringing might have been a bit odd, but one skill my Dad passed on was the ability to “let it go.” I actually indulged in that a bit when I was out on my trip from the last couple days’ assignment. Just laid down on a bench on the trail like an old hobo and closed my eyes to listen. Not to anything mind you. Just to simply be there, attentive to the moment. I love breaks like that, where all ambitions and plans fall away and I can just be, with no agenda other than a moment’s peace.