Combining these two, because they’re kind of intrinsically related and the actually assignments for them are a bit muddled. Day 10’s was “Spark, finding inspiration.” Basically it just called on us to find something that interested us, made us curious. Of course, I totally hit the wall there, because my interests are so varied, I’m like that damn dog from “Up”… “Squirrel!” Day 11’s was “Fuel, finding what to feed that inspiration.” The assignment was to get up and find material that can get translated by the “spark” into fire. I broke the rules and jumped ahead going out for a walk, getting away from the computer, and trying to get some quiet.

The first thing I noticed is that “quiet” isn’t an easy commodity to come by, inside or out in our society. I went to a local park/trail, where I knew I could get some isolation, but the noise of “us” is pretty much everywhere you go. Cars, cars, more cars. What’s interesting is that that noise is kind of like the white noise of water. As that my place had a small river to compare to it, it made the similarity of the noise very apparent. There’s something relentless though to our noise, where as the noise of water is much more like breath, relaxed. 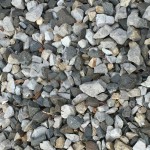 On my walk I saw  lot of things, took some pictures. Basically anything that caught my eye and interested me enough to stop. No real plan to it. These rocks are used to grade railroad tracks. Splintered bits of stone, in a variety of cold greys with a peppering of warm tans and browns. Broken railroad timbers. 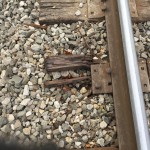 I was amazed at how one would be fine and the next would be almost completely gone. It was very disconcerting. 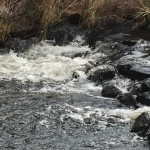 I mentioned water earlier. It’s always flummoxed me, artistically. Always in motion. It surprises me how “fake” it looks when it’s fixed and the motion robbed of it in a photograph. These pictures of mine remind me of plastic. Their slight out of focus quality makes the image feel impressionistic, but without motion they might be some sort of thin magma. 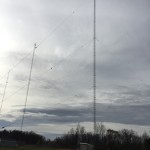 I also took pictures of a few man made artifacts. These antennas were near a cell tower. I’m not exactly sure what their purpose is. I took pictures of them for the lattices of impossibly thin wire that held them aloft. It impressed me, the ingenuity of using counter balanced forces, balanced so precariously. 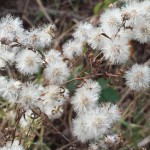 From there, I turned my eyes back down. The path had hundreds of these little plants about. These are another structure I find fascinating and challenging. To a painter, you might describe them with a couple dabs, but to a computer artist, the notion of grappling with those tiny filaments, the complex geometry of the seed pods at their heart, the chaotic sprawl if tiny stems which they hang on. It would be quite a project, transcribing that into data. 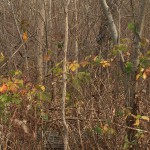 From there into the underbrush. I’ve played a lot of games and I’ve seen a lot beautifully done vegetation, but it all pales in complexity next to something like this. I originally took the picture because I liked the smattering of green, gold and orange of the leaves. The majority of the frame those is a tangle of linear strokes and stems. The hatchwork reminds me of a Pollock. Just an incredibly complex mess of lines, but that little blue jay hidden away in there knows how to navigate it. 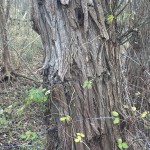 Then I came on a few of these trees, with the most amazing shaggy bark. Hoary? Gnarled? They don’t seem quite the right works, according to google at least. Huge cracked strips of plant armor covered these things and in places seemed to erupt out, as something festered underneath or the “plate tectonics” of the trees growth rammed the bark together. 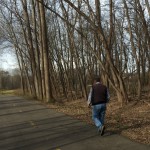 I also saw a few of these. Head down, earphones on, eyes on the screen as he walked through a cathedral. Frustrating, but hey, didn’t stop me from looking around. Snapped this shot after he passed me. I doubt he even knew I was there.

Last picture, some rot. Well, rot’s not really the right word. There were a lot of felled trees about and this one had been split open, revealing the work that had gone on within. This swiss cheese of decaying wood, in sandstone hues, is the work of termites, carpenter ants and wood lice. As always, I’m struck by the complexity of natural form derived from simple processes and daunted at the notion of how I would begin with something like this. 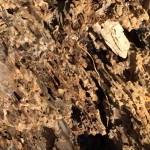 So, spark? Nature. Nature always does it. I didn’t get any pictures of them. Not fast enough, but there were a cadre of jays, finches and swallows that followed me about as I trekked through their domains. Pretty sure they were keeping tabs on me to make sure I wasn’t going to try and riffle their nests or that I wasn’t going to drop treats. They greatly over estimate my ambition in the former and I’d not come prepared for the latter. I’ve wanted to rig a bird puppet for years though. Never made the time for it. That really needs to change. Likewise, I’ve always wanted to model/sculpt some plants and I’ve wanted to learn more about fluid sims. All topics that aren’t strictly character animation… but then, I’ve never been very good at limiting myself to one interest.

This site uses Akismet to reduce spam. Learn how your comment data is processed.